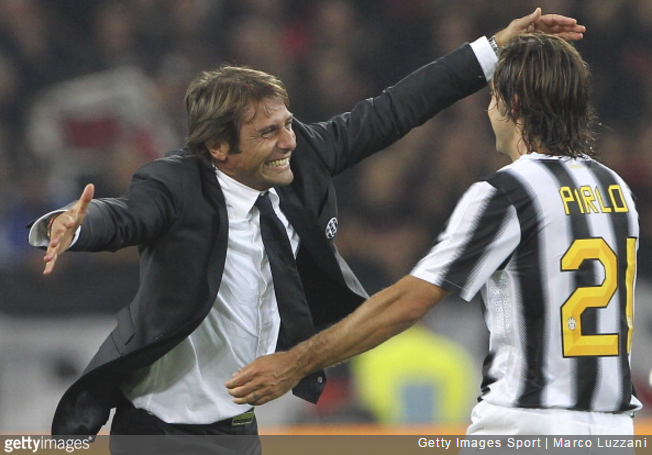 It’s looking increasingly likely that Antonio Conte will be the man tasked with re-floating Chelsea’s capsized luxury liner next season, with the Italy coach having held several rounds of talks with the club’s top brass over the past couple of weeks.

Having played under him at Juventus for several years, hirsute pass-master Andrea Pirlo was wheeled out and asked what the Chelsea gang can expect with Conte at the helm.

While generally singing his former gaffer’s praises, Pirlo also warned that Conte has something of the devil about him too, telling the Daily Mirror:

I love the man, I have nothing but respect and admiration for him. I know if he takes a job, any job, it will have to be on his terms.

There is a beast in him. I have been in his dressing room at half-time when we have been winning, but he comes in and will be throwing full bottles of water around because of a mistake we made or because he feels we should be further ahead.

Indeed, it turns out that Conte is something of an obsessive, with Pirlo referring to him as “a beast with two wives” before duly elaborating:

His life is football. I know he is up until 3-4am in the morning, studying videos, looking at errors, ­studying the opposition of the next game.

It is a good job Elisabetta is such an understanding wife, and if he takes the Chelsea job then she will have plenty of time to enjoy London, because he has two wives – Elisabetta and football.

I even know he will turn on the bedroom lights in the middle of the night because he has thought of something he needs to write down – you will not find a more understanding woman than her.

I have played under a lot of great managers, but I can say that Conte is a genius. Like all men who possess genius, he is a little mad.

The man can be a beast, a dressing room when he is angry is one of the most dangerous places you can be.

Got that? A geniusbeast with two wives and a face like a bad John Travolta waxwork.

In short, he’s the total package.