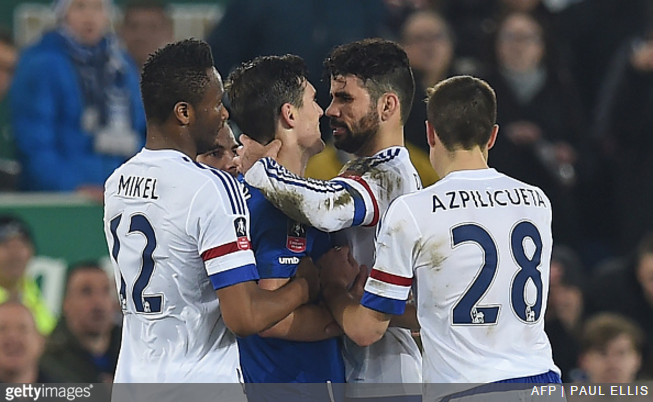 Chelsea have taken the time to kindly assure us all that Diego Costa did not gnaw on Gareth Barry’s neck in the act of getting himself sent-off in yesterday’s FA Cup quarter-final at Goodison.

The striker spent the majority of the match attempting to rile his opponents up, tangling with Barry on several occasions before finally seeing red in the 84h minute.

The pair tussled for the ball, with Costa reacting by snuggling in close to Barry and giving him a deep and passionate neck nuzzle.

Referee Michael Oliver took umbrage at this ungodly display of affection, and administered the Chelsea forward with his second yellow…

The incident sparked a minor debate among independent observers, with many attempting to analyse the footage for proof of tooth.

Thankfully, a Chelsea spokesman quickly sought to clear things up by passing word to the club’s official Twitter account:

Diego spoke to club officials and expressed regret over his reaction to the challenge from Barry that led to his red card.

But Diego was also very clear that he did not bite him at any point during that altercation.

Bite or no bite, what a strange little human being Diego Costa truly is.