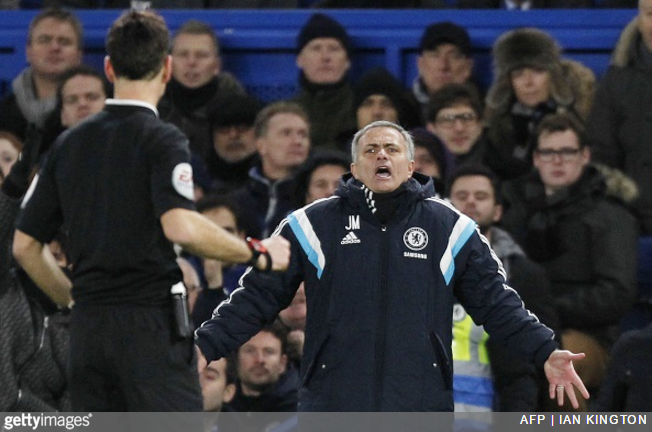 On 19th April 2014, something unusual happened to Jose Mourinho. After a run of 77 undefeated games at Stamford Bridge (61 wins and 16 draws), he finally found himself on the losing side when the final whistle blew.

The shock was made all the greater by the fact that Sunderland, who were propping up the table, were the visitors on the day. Chelsea, by way of comparison, were very much in the title picture (if you can imagine such a thing).

The Black Cats slogged to a 2-1 victory, though the game saw the home side have a number of penalty appeals turned down. In the aftermath, Mourinho reacted with all the grace and courtesy for which he has become renowned:

I want to congratulate again Mike Dean. I think his performance was unbelievable and I think when referees have unbelievable performances I think it’s fair that as managers we give them praise.

That little sarcastic blast duly landed Mourinho with a £10,000 fine – though it wasn’t the first time he’d been guilty of lashing out at match officials, and it almost certainly won’t be the last.

You’d think he’d have learned to keep his mouth shut by that point.

However, it wasn’t just referees in England that attracted Mourinho’s ire. In March 2010, while managing Inter Milan, Mourinho made hand-cuff gestures to a referee in protest at the decisions being made during a match. Jose was fined £35,000 and banned from the touchline for the next three games.

And in December of the same year, while managing Real Madrid, he marched into a press conference following a game against Sevilla brandishing a type-written list of 13 “serious mistakes” made by the referee. When he had time to type it up is anybody’s guess.

No wonder former referee Jeff Winter said in 2005: “On the few occasions Chelsea lose a football match there is a conspiracy theory – it is the referee’s fault.”

Yes, that just about sums it up nicely.