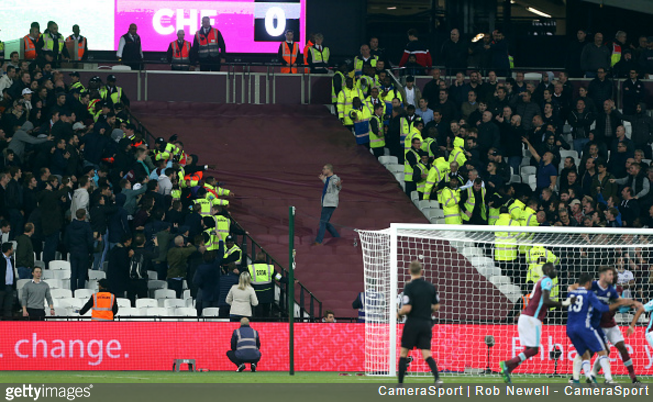 As you’re no doubt aware, West Ham’s EFL Cup win over Chelsea last night was entirely marred as terrace etiquette circa 1975 was observed in the stands as clans of tribal troglodytes clashed at the Olympic Stadium.

Despite the best efforts of the stewards, coins were thrown, seats were torn up and innocent people were injured as pockets of fans brawled in and around the ground.

However, just to add a little extra dynamic, Metropolitan Police have also confirmed that they are investigating a blatantly homophobic ‘song sheet’ that was apparently distributed among the home fans before kick-off.

Photos of the sheet appeared on social media, with all Hammers fans duly urged to “rip into John Terry” with the offensive chant provided… 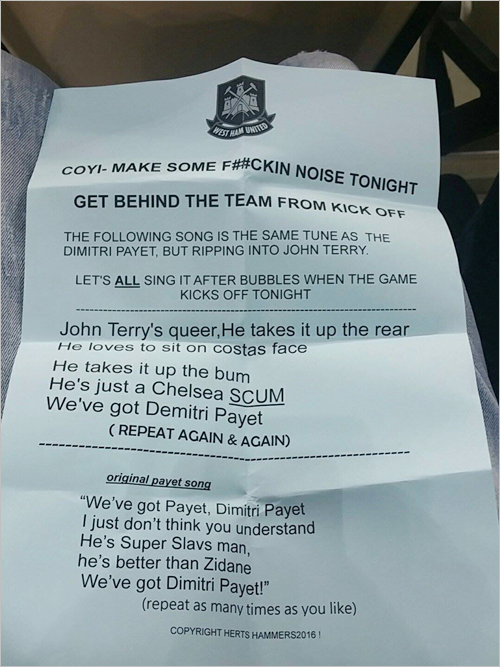 Nice of the dullards responsible to A) censor the word “f**kin” and, B) secure their valuable intellectual property with a copyright.

Just to be clear to people this isn’t banter, it’s homophobic. Disgraceful from West Ham… pic.twitter.com/vG57WfAxp2

It just so happens that the Met Police agree, with a spokesman confirming that the force will be looking into the song sheet as part of their wider investigations into the dismal scenes that enveloped the game.

Police are aware of an leaflet handed out before the match containing homophobic contents.

This will will form part of the post match investigation.

Frankly, anything short of a lifetime ban would be overly lenient in our eyes.