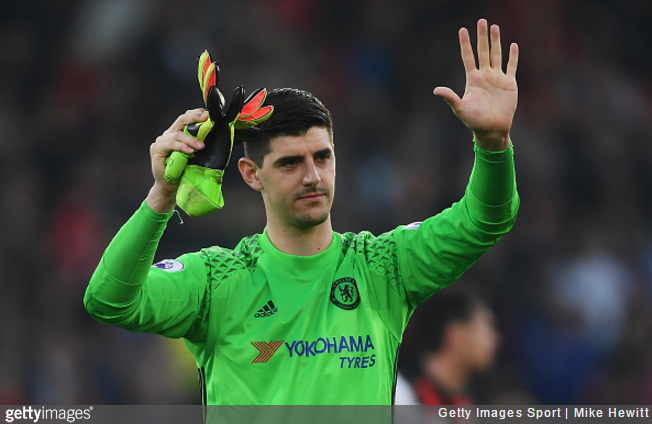 The keen-eyed amongst you may have noticed that Asmir Begovic made his very first Premier League appearance of the season betwixt the sticks for Chelsea as Antonio Conte’s went down 2-0 against Manchester United on Sunday afternoon.

This was because the Blues’ first-choice goalkeeper, Thibaut Courtois, was ruled out of the vital match with an ankle injury.

While no official confirmation has been forthcoming, the Telegraph reckon that the Belgian stopper sustained his injury while filming a promotional video at Chelsea’s training ground earlier in the week.

Specifically, it’s being reported that Courtois was playing basketball with several of his teammates when he “landed awkwardly” and did himself a mischief:

The basketball game was organised by the club and was filmed as part of their commercial duties with the NBA. Courtois, who was taking part along with team-mates including Asmir Begovic – who replaced him against United – Nemanja Matic, Marcos Alonso and Nathan Ake, landed awkwardly after he jumped to catch a basketball.

Asked after the United defeat, Conte refused to go into detail as to the nature of the injury, simply stating for the record:

I think after a defeat it’s not right to go into this situation. Courtois had an injury during the week and then for this reason he wasn’t available.

Unfortunately for Chelsea, it looks like Courtois’ little miscellaneous injury is also going to keep him out of next Saturday’s big FA Cup semi-final clash against Tottenham at Wembley.