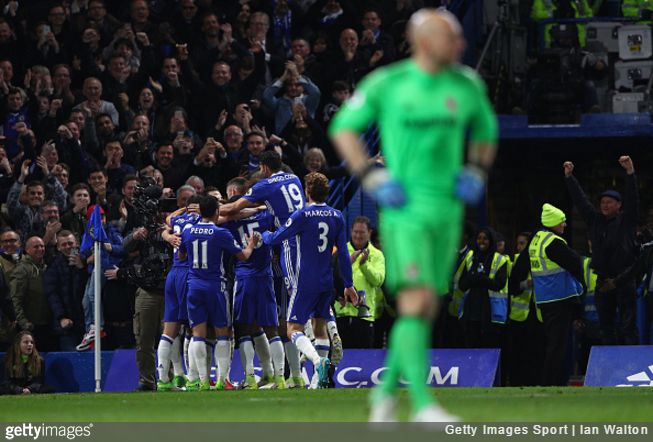 Chelsea strode to within three points of clinching their fifth Premier League title with a comprehensive 3-0 win over Middlesbrough on Monday evening.

The result was also enough to see Boro’s relegation confirmed, though it feels like it’s been months in the offing now.

The home side were buoyant from the off, with goals from Diego Costa (23′), Marco Alonso (34′) and Nemanja Matic (65′) proving more than enough to consign Steve Agnew’s waning side to their fate.

Weirdly, it was Costa that managed to sum up Boro’s howling existential pain in photographic form…

In laying on the first and third goals, Cesc Fabregas also became the first ever player to reach 10 assists in six consecutive Premier League seasons.

Conversely, it was a bit of a rotten outing for Boro ‘keeper Brad Guzan, who was unfortunate enough to be nutmegged for all three goals…

And so, another routine victory for Antonio Conte’s champions elect, who could seal the deal if/when they manage to beat West Brom this coming Friday.

Cue, hugs for everybody…