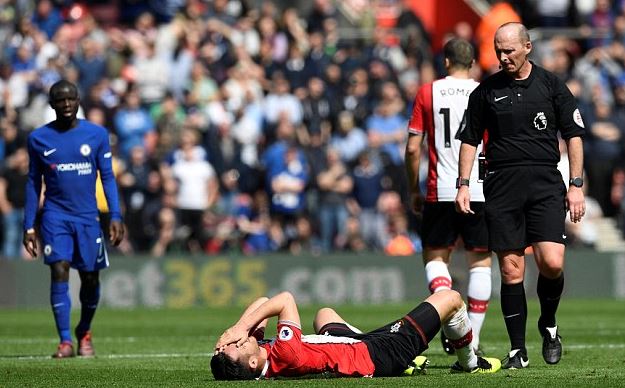 An Olivier Giroud brace helped secure a 3-2 win for Chelsea at St. Mary’s on Saturday, with the Blues coming from two goals down to take all three points back to west London.

However, Chelsea were lucky to finish the first-half with 11 men still on the pitch after Marcos Alonso launched a pretty appalling challenge on Shane Long.

The Spaniard stood on the back of the Saints’ striker’s leg with a challenge which an action which looked anything but accidental.

However, the incident was missed by Mike Dean, who didn’t even blow for a foul. Not like him to miss a chance to put himself in the spotlight. However, a retrospective punishment for Alonso may still follow…

Thankfully, Long suffered no serious injury from a lunge which could easily have broken his leg.

To add insult to injury for Saints, Alonso would go on to set up one of Giroud’s goals in the second-half.

Southampton boss Mark Hughes was understandably less than impressed by the lack of action from the officials, saying:

It was a poor challenge, it should have been a red card in my view.

I don’t think he was booked, so maybe people need to look at that again, retrospectively. Thankfully he’s just about OK, but he’s been raked down the calf.

We’re not here to accuse people, and no sour grapes, but a decision needs to be made on that because it’s not acceptable

All fair enough, although the Welshman has produced enough sour grapes in his managerial career to fill a vineyard.

If Alonso does find himself fingered by the authorities for the challenge, he could well miss next weekend’s FA Cup semi with none other than Southampton.