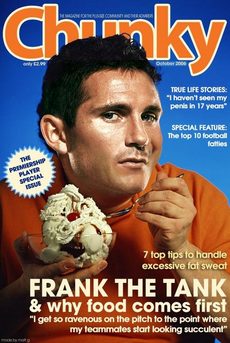 As spotted today on sister site Chelsea Pies. Reason No.6 is our favouriteâ€¦
1 Inter desperately need him
Apparently Milan’s second best team want to buy Non-fat Frank to replace Non-fat Patrick Vieira who seems to be heading Manchester City’s way.
2 He still hasn’t been offered a proper new contract by Chelsea
Come on Kenyon. Where the hell is it? If you want to do one thing ONE THING to get Chelsea fans back onside sort this out. For the love of God if Henk ten Cate is worth Â£6.2million surely Frank Lampard is worth an extra Â£10,000 a week than what you currently pay him. Cough up and end this now Kenyon! (Rant over.)

3 This joke circulating the Inter message boards is too funny to ignore…
Q. What do you call Frank Lampard discussing terms with Inter Milan president Massimo Moratti?
A. A heavy discussion.

4 He likes spaghetti a lot
Well, he does according to this month’s issue of Chunky magazine (pictured).
5 England fans give him grief at every ground he goes to
We still have no idea what this is all about. He can’t help being picked!
6 Vertical stripes are slimming
As is black. Black stripes on a kit? Jesus! Non-fat Frank will become completely svelte Frank.
7 His wife Elen wants to shop like a banshee in Milan
Apparently she dumped all of her designer clothes after Non-fat Frank allegedly did something naughty in Vegas. Click here for the scoop that probably isn’t remotely based on any kind of truth.
8 Barcelona are in no position to buy
With all the speculation about Rijkaard and Ronaldinho the President doesn’t seem too eager to splash out on another high earner right now.
9 Non-fat Frank was one of Jose’s closest allies
Mourinho’s bizarre departure will have hit Frank hard, and who knows, Jose might even be in the Inter hotseat by Xmas.
10 Everyone in England keeps referring to his weight
Even we do it, and we not only love him, we know he’s not fat. Seriously, what the hell are we thinking? There’s about 234449504902 fat references in this post alone! If he leaves, we should be ashamed of ourselves.
By Lee Coan