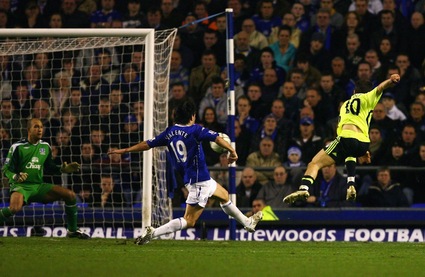 Joe Cole scores the only goal of the Carling Cup semi Final, second-leg match between Everton and Chelsea at Goodison Park. Everton have not beaten Chelsea since November 2000, a hoodoo of Arsenal vs Spurs proportions. Incidentally, Petr Cech played last night despite his wife giving birth to their first child – who said the Carling Cup wasn’t important? Chelsea fans should be thankful for Cech’s selflessness – the big goalkeeper was their man of the match, and made several crucial saves in the second half. Credit also goes to Chelsea’s back four, admirably marshalled by Ricardo Carvalho.
Chelsea will play Spurs in the final, held at Wembley Stadium on 24 February.
Photo Alex Livesey/Getty Images
Chelsea Pies and Spurs Pies
Watch highlights of the match after the jumpâ€¦