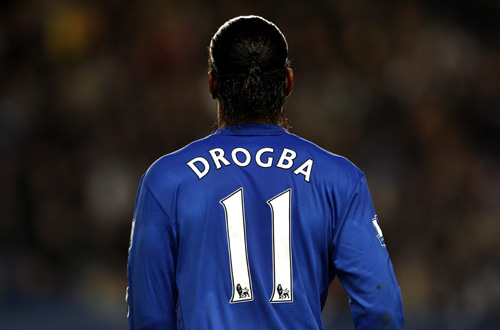 He can hardly be considered as one of the nation’s sweethearts, but Didier Drogba could well find himself (well, his Chelsea shirt) taking pride of place in the British Museum very soon.

His replica no. 11 Chelsea shirt is a contender for the final place  in Radio 4’s A History of the World in 100 Objects series, with all 100 pieces to be put on display in the British Museum. According to senior content commissioner, David Prudames, Drogba’s shirt would be a worthy item for inclusion:

“This isn’t just any football shirt. It bears the name of Didier Drogba, an African who grew up in France and whose skills have led to global fame. Through television, radio, magazines, billboard posters, the Internet, Drogba’s face and tremendously gifted feet are known the world over.  And Didier plays for Chelsea, a team based in Lodon and owned by a Russian. The shirt was made by a German-owned company, in China, and bought in London.

The shirt is a mass-produced symbol of our globalised world. It’s got 2010 in every millimeter of its man-made fibre.”

If it makes the cut, the shirt will join objects such as a Chinese bronze bell, an Inca gold llama and the Rosetta Stone.

Fans of the other Premier League clubs, particularly the bigger ones, and the ones based in London, might have a rather different view on the matter to Prudames.