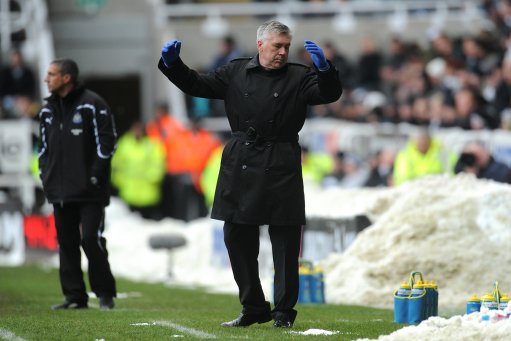 Is Carlo Ancelotti being haunted by the ghost of sackings past?

Chelsea manager Carlo Ancelotti insists that he is not fearing for his future at the club after seeing his side’s poor run of form (one win in their last six league games) compounded by a 1-0 Champions League reverse in Marseille last night.

Chelsea now face an unenviable run of games with ties against Tottenham, Manchester United and Arsenal making up their next three fixtures, but Ancelotti is adamant that he is the man to oversee an about-face in the club’s ailing fortunes:

“Everyone now thinks we will be beaten in our next game. I picked my strongest team against Marseille because we are in a bad moment and it was a chance to change that.

“But we missed this opportunity because we didn’t win and we didn’t play well, so the bad moment continues.

Ancelotti paused for a moment, then momentarily continued:

“Now we have a very difficult game against a very good Tottenham team and we all have to stay strong and focused.

“I am not worried about my position, just by the fact that we are not doing our best. We have to do better to move on from this moment quickly.

“It’s not a good moment. The bad moment continues, but we have to keep going. We’ve lost some confidence in our play.”

Anyone else think that they can spot a certain word that wily old Carlo may be on commission for slipping into his press statements? Take a moment if you need one.