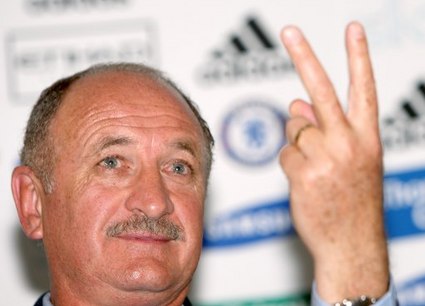 Big Phil: “Frank wants to stay. Very good, yes.”
Lamps: “That’s news to me: unless Chelsea give me a five-year contract, I’m off to Inter.”

Scolari’s claim during his maiden press conference that F-Wank would stay at Chelsea is reported to have triggered an angry confrontation between the midfielder and chief executive Peter Kenyon – in the club canteen, of all place.
According to The Times, “Lampard, who watched the press conference at the training ground in Cobham, Surrey, between double sessions, confronted Peter Kenyon in the canteen when the chief executive returned from the nearby Hilton Hotel, where Scolari had been speaking.”
Inter, smelling blood, increased their bid for Lampard to almost Â£8m last night – and unless Chelsea meet the English international’s demands, he’ll surely be off to Serie A, to impress Inter with his range of speculative, off-target shots.
Lampard’s agent, Steve Kutner, stressed that while his client wanted to stay, that didn’t mean he would stay: “He made it categorically clear that although he would love to finish his career at Chelsea, with the deal he has been offered that is not possible.”
Lampard wants a five-year contract worth Â£135k a week; Chelsea won’t give it to him. Simple as that.
Who’s in the right here? I’d say Chelsea, who are under no obligation to give Lampard – who is already 30 – another five bumper years at the club. Like so many footballers today, F-Wank’s appalling greed is clouding his judgment. Chelsea will surely accept Inter’s next bid, which could be in the region of Â£9m.