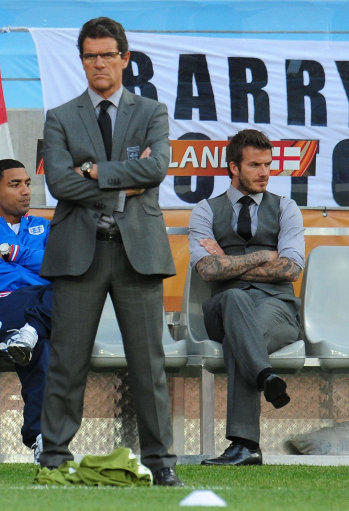 In case you missed it, Fabio Capello confirmed yesterday that he fully intends to stand down from his position as England manager and retire from football altogether after the culmination of the Euro 2012 tournament in Poland and the Ukraine.

As is their duty, the unofficial search for his successor has begun within press circles, and it would appear that crocked midfielder David Beckham has already been sounded out as a potential candidate to take over at the helm.

An untimely achilles injury cost Beckham his place in Capello’s World Cup squad, and the 35-year-old travelled to South Africa in an intermediary role. Beckham was stationed to theoretically provide an extra line of communication between the players and the managem…I’m sorry, hindsight rendered that sentence too ridiculous to finish.

Anyway, when asked by Sky Sports News whether or not he was considering a future in international management, Beckham ruled himself out of the running fairly swiftly;

“I wouldn’t put any money on that. [Capello] has been in charge for a few years now and he obviously feels that it is the right time to step down in a couple of years, and hopefully he ends by winning the European Championship.”

The L.A Galalalalaxy star also admitted that he is still hopeful of returning to the England fold in a playing capacity;

“Obviously it was a surprise when Fabio Capello said I was too old. He spoke to me after that and explained everything to me and it was all brushed under the carpet. At the end of the day, the manager’s got a job to do and he’s doing that well.

I have said before that I would still like to be considered for selection, and I’ve been working hard with the rehab, trying to get the strength back into my legs. I’m feeling good at the moment, things are on schedule, and hopefully I’ll be back on the field sooner rather than later”