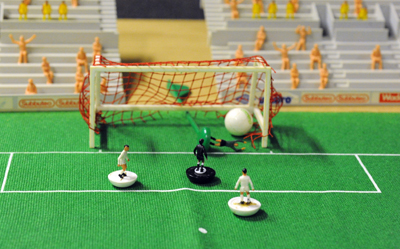 “A regional daily newspaper has found a new way around the ban on photographers imposed by Southampton Football Club – by using Subbuteo table football figures to recreate a match.

The Swindon Advertiser came up with the unusual move as a way of covering the Johnstone’s Paint Trophy match between Swindon Town and Southampton last night.

Southampton brought in the controversial ban on press photographers at its ground last month, saying newspapers should instead pay for images taken by its own professionals.

Anthony Marshall, chief sports writer at the Swindon Advertiser, came up with the idea of using Subbuteo to recreate key moments from the game.

He spent time yesterday painting the plastic football players so they were in the correct colours and setting up a pitch in the office.

While covering the game last night, he recorded scenes from the match in his notebook, which were then recreated on the Subbuteo pitch and photos taken.”

Via Hold The Front Page

The longer this goes on, the more Southampton look like churlish dicks, and the more you admire the resourcefulness of Britain’s regional press. Well played, the Advertiser.