Trying to make sense of the FIFA World Rankings is very much like trying to plait smoke, but nevertheless the system persists.

Germany remain top of the shop with Brazil tucked in second place. Euro 2016 winners Portugal make up the podium, while Argentina and previous table-toppers Belgium are in fourth and fifth spot respectively.

However, the latest thoroughly confusing coefficient quirk has seen England drop three places to 15th after drawing with both Germany and Brazil this month, while Italy – who, as you may recall, spectacularly failed to qualify for the World Cup recently – have risen one rung to leapfrog Gareth Southgate’s side into 14th place.

Don’t try to make sense of it. Just accept it for what it is: officious nonsense. 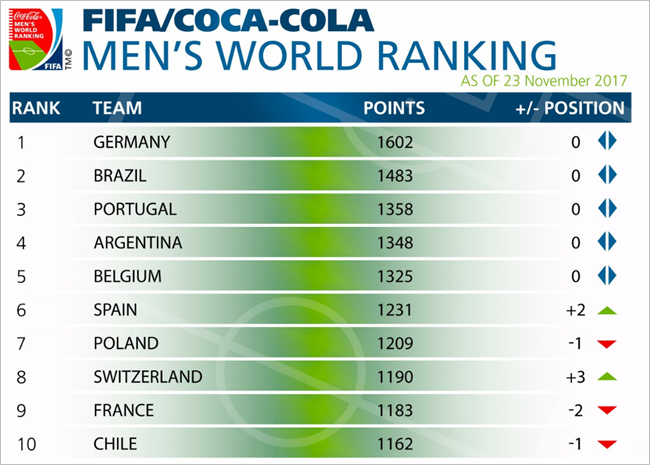 Elsewhere, Denmark have scored a dramatic ascension by jumping seven places up into 12th while Sweden, who saw off Italy in the play-offs, have also leapt up seven places into 18th.

As for the other home nations, Wales have fallen five places to 19th, Northern Ireland have dropped one to 24th and Scotland are down three into 32nd, level with the Republic of Ireland and Iran.

As if you care.