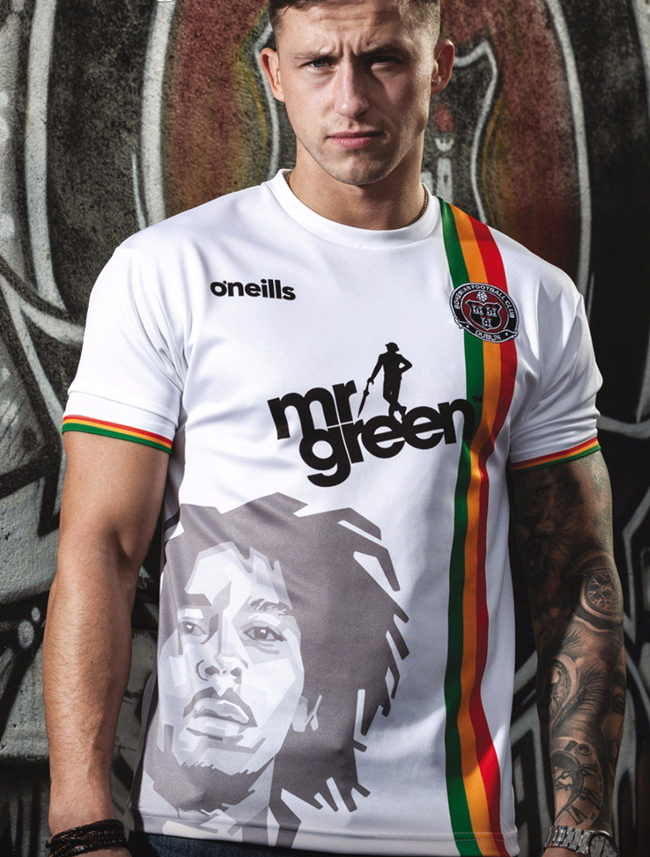 League of Ireland side Bohemians have been forced to pull the plug on their new Bob Marley-themed away kit after falling foul of a copyright issue with the design.

The white shirt featured an image of the legendary reggae artist, a (slightly tenuous) nod to the musical history of Bohs’ Dalymount ground (Marley and the Wailers played one gig there in the 1980s).

However, despite “positive global reaction” to the jersey, the club have now had to scuttle the use of Marley’s picture after being contacted by the Bob Marley Representative Agency (BMRA).

Bohs have issued a statement explaining that they followed all of the correct processes in obtaining the image through a “world-leading third-party photo licensing company” .

However, due to existing contractual obligations held by the BMRA elsewhere, use of said photo is a legal no-go:

The Bob Marley representative agency has informed us that this company did not have the right to grant any such licence for this image. We are dealing with this separately.

Subsequently, following direct correspondence with the Bob Marley representative agency, they cannot license the image to the Bohemian Football Club due to their own contractual and other obligations.

With a heavy heart, Bohs were left to announce that the Marley kit therefore cannot be supplied as advertised and that any fan who registered a pre-order can either get a refund or store credit.

But hang on a mo’. There does exist a third option, with fans also able to purchase the club’s alternative re-designed away kit.

The new shirt maintains the original Rasta-themed colour scheme but features the image of a clenched fist in lieu of Marley’s picture.

The clenched, raised fist, is a a symbol of solidarity and support used to express unity, strength and resistance.

Bohs also added that 10% of the profits from the new shirt will be donated to the “already fan-led and previously fan-funded initiative of bringing people living in Direct Provision (i.e. asylum seekers) to games at Dalymount Park.”

Which is very cool of them.