Sala was the French side’s top-scorer when he agreed his transfer to Cardiff City. Of course, grim fate has ensured he’ll sadly never know the same success at the Bluebirds.

With Sala banners, flags and placards dotted all around the Stade de la Beaujoire, the match served as a communion of sorts, with fans paying their respects in unison.

Cardiff even sent a contingent of travelling supporters, who were allowed to rig up their own special message in the corner of the stand… 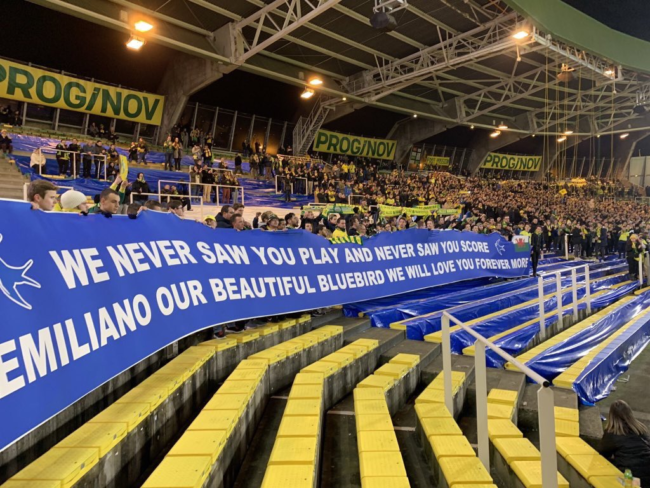 The Saint-Etienne squad warmed up while wearing Sala t-shirts, a gesture warmly applauded by their hosts.

The centre-circle was filled with a giant image of Sala’s face, the same image that Nantes have been using as their profile picture across all of their social media accounts since the day he went missing.

Then, with nine minutes gone, play was stopped (with the game still goalless) so that the entire stadium could offer their sympathies together with a resounding round of applause.

Indeed, it was all too much for Nantes coach Vahid Halilhodzic, who couldn’t hold back the tears as Sala’s name rung around the rafters…

The match went on to finish 1-1, with both goals coming midway through the second half.