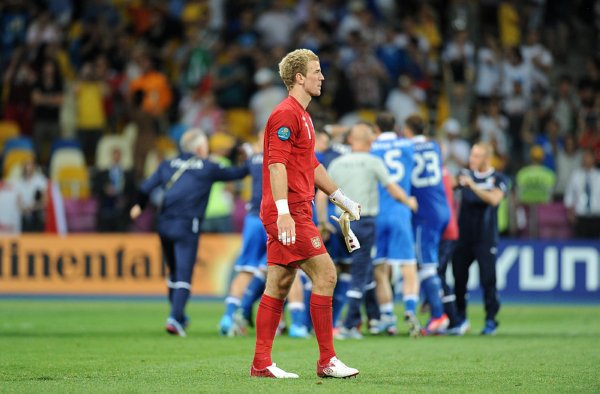 3. When was the last time Wayne Rooney put in an international shift anywhere near on a par with his domestic game? Pies’ pub committee decided it may well have been Euro 2004. The vitality/basic technical competency he displays for Manchester United as a matter of routine seem to abandon him as soon as he pulls on an England shirt. It’s some ‘Space Jam’ hoodoo. His photo will probably be on the Ukrainian milk cartons this morning after that debacle.

4. England are so very strangely submissive, especially as the game starts to wick away. For the first 20 minutes they were on par with Italy. For the remaining 100+ they were Japanese business men in dog collars, nipple clamps and adult nappies.

5. Even with our England-hued bias, we were willing Daniele De Rossi’s 25-yard shot to go in – that thing, slicing across a ball that was arriving high and at pace, was an absolute beaut.

6. Andrea Pirlo held possession for a cumulative four and a half minutes over the course of the game – very nearly double Scott Parker and Steven Gerrard’s sum totals combined – completing 117/131 passes with a 87% success rate. England’s most completed ‘pass’ on the night was Joe Hart to Andy Carroll. Make of that what thou wilt.

7. While we’re on the subject, Joe Hart completed more passes (45) than any other England player last night by virtue of playing a few five-yarders out to the defence and clumping the rest up to Carroll. Therein lies the problem.

8. There’s a school of hindsight-heavy thought emerging this morning that Paul Scholes could, and perhaps should, have been England’s Pirlo at Euro 2012 – but the mere fact that we’re pining for a 37-year old asthmatic who’s already retired once is a damning indictment of England’s nous.

So good it just has to be fattening.

10. Just goes to show: an iPad and gargoyle faces are no substitute for intuition and athleticism. We suspect the ‘hundreds of videos’ Joe Hart watched on his computer before the game were really just the one of him farting in a car on endless repeat.

11. Let’s not get beyond ourselves, there’s no need for endless autopsies. The best four sides at Euro 2012 (i.e, none from Groups A or D) have made the semi-finals. England are a first-tier average side and have thereby satisfied all expectations with a run to the quarters.