Chelsea extended their lead at the top of the Premier League on Tuesday night, after the Blues played out a 1-1 draw at Anfield with Liverpool.

Brazilian defender David Luiz opened the scoring on 24 minutes, courtesy of a fabulous 25-yard free-kick which totally caught out Simon Mignolet in the Liverpool goal.

Soon after the restart, Roberto Firmino had a great to chance to level the scores, only to sky his effort with the goal gaping.

What a miss by Firmino pic.twitter.com/8OD01qiEUW

However, Liverpool did eventually (and deservedly) get themselves back into the game, via a close-range header from Georginio Wijnaldum.

Wijnaldum was also lucky to dodge a bottle of beer which was lobbed at him, presumably from Chelsea fans, while he was celebrating his goal. 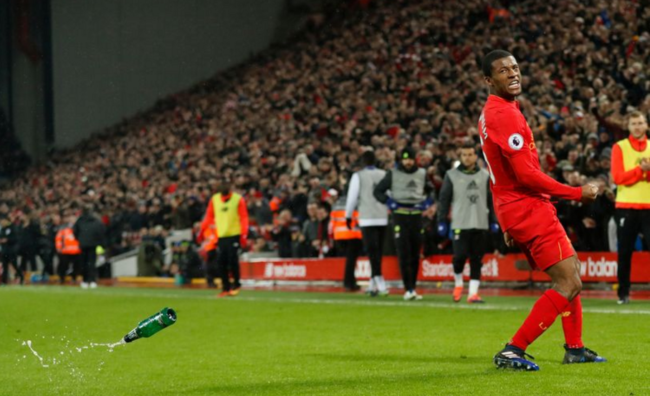 The Blues did have a great chance to win the game late on when Diego Costa was fouled in the box by Joel Matip. However, the Spaniard saw his subsequent spot-kick saved by Mignolet.

Liverpool themselves had a superb chance to claim all three points at the death, only for Firmino to head straight at Thibaut Courtois.

The draw sees Antonio Conte’s side go nine points clear at the top of the table, while Jurgen Klopp and co. are 10 points back in fourth.