Loris Karius, who suffered a nightmare 90 minutes for Liverpool in their Champions League final defeat to Real Madrid, sustained a concussion in the game, according to doctors in the USA.

The German goalkeeper’s two mistakes, which led to two of Madrid’s three goals on the night, came after the 24-year-old had been involved in a collision with none other than Sergio Ramos.

The incident happened earlier on in the second-half, with Ramos, apparently accidentally, catching Karius in the face.

OFFICIAL | UEFA confirm Sergio Ramos will not face any disciplinary action after appearing to elbow Loris Karius in the UCL final. pic.twitter.com/qdnfG4XZXg

The ‘keeper remonstrated with the referee after the incident but no further action was taken by the officials.

Karius would concede to Karim Benzema soon after, courtesy of a totally misjudged attempted throw-out.

Later on in the game, with Real 2-1 up, he would then make a mess of a Gareth Bale shot, with the ball ending up in the back of the Reds’ net.

Karius was, unsurprisingly, distraught at the final whistle but it now appears that his errors came while he was concussed.

After doing tests on the Reds’ ‘keeper in Boston, Dr Ross Zafonte released a statement which said:

We have concluded that Mr. Karius sustained a concussion during the match May 26, 2018.

It could be possible that such deficits would affect performance.

Here’s the statement in full… 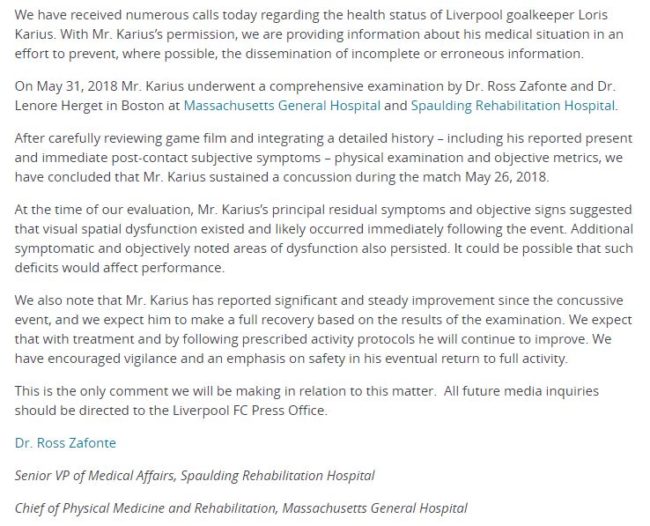 All this may possibly go some way to explaining Karius’ clangers.

However, it also leaves him open to accusations of trying to make excuses.

You can be the judge of that!