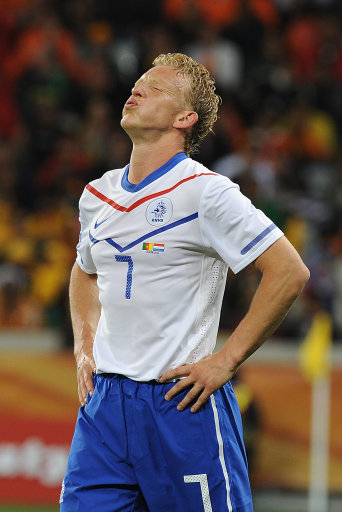 Liverpool forward Dirk ‘Hollywood’ Kuyt has been ruled out for anything up to two months after shearing the ligaments in his left shoulder whilst attempting a scissor-kick during a training session.

Kuyt has now been ruled out of Holland’s Euro 2012 qualifier against Finland tonight, as well as Liverpool’s next three or four fixtures (including their trip to Manchester United on Sep 19th), but Dutch coach Bert van Marwijk didn’t seem overly concerned when breaking the news to the press;

“Dirk does that a lot. There was nobody close to him, but this time it went wrong. He has strained and possibly torn ligaments in his shoulder. He’ll probably have a few weeks off.”

File this under ‘when grafters get stars in their eyes, bad things tend to happen’.