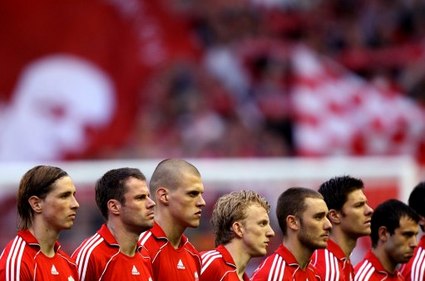 LIVERPOOL
Jose Reina Had little to do. Some decent distribution out of hand, and could do nothing about Riise’s own goal 6/10
Alvaro Arbeloa Not one of his best games. Sloppy in possession. 5
Jamie Carragher A typically committed performance from a player who thrives on nights like this. Not pretty, but very effective. 7
Martin Skrtel Fast becoming an Anfield favourite and you can see why. Formed a muscular partnership with Carra. 7
Fabio Aurelio Didn’t set the game alight, but let no one down. Subbed off after he strained his groin. 6

Xabi Alonso Liverpool are starting to reap the rewards of playing Alonso sparingly earlier in the season. He is getting stronger as the campaign reaches its conclusion, and was the classiest player on the pitch last night. 8 MAN OF THE MATCH
Javier Mascherano A fairly comfortable evening for Mad Masch. He didn’t have too much trouble breaking up Chelsea’s midfield. 6
Steven Gerrard A couple of fine moments, including a shinned volley that Petr Cech had to tip over, but overall things didn’t come off for him. 6
Ryan Babel Had a poor first half, when his touch deserted him, but improved greatly in the second half before he made way for Yossi Benayoun. 6
Dirk Kuyt Another blood-and-guts performance from the man with three lungs. Took his goal smartly. 7
Fernando Torres On previous form, the Spaniard would have scored when one-on-one with Reina. But this was not his night, although he worked his little socks off. 6
Subs:
John Arne Riise His disastrous injury-time own goal, which may cost Liverpool a place in the final, was perhaps a result of him not trusting his shaky right foot to clear a dangerous ball. Used to be respected by the Kop, but not these days. 3
Yossi Benayoun Didn’t have time to influence the game. 5 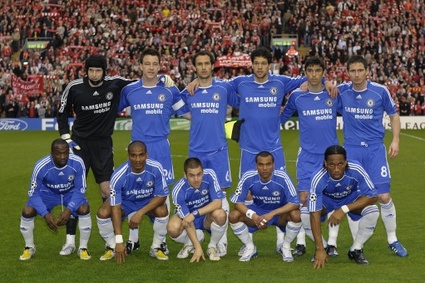 CHELSEA
Petr Cech Two fine saves from Torres and a sharp tip-over from Gerrard added up to a fine night for the injury-prone ‘keeper. 7
Paulo Ferreira Kept on his toes by Babel, but did his defensive duties well enough. 6
John Terry Composed and usually in the right place when it mattered. 7
Ricardo Carvalho Babysat Torres for most of the evening and did a good job. 7
Ashley Cole Chelsea’s least reliable defender on the night. Seems to disengage his brain when he takes the pitch these days. 5
Claude Makelele Way past his sell-by date on this evidence. Should have tracked back for Kuyt’s goal. One of his worst outings in a Chelsea shirt. 4
Frank Lampard Largely ineffective, although he did make some decent runs into dangerous areas – shame he couldn’t then do anything when he got the ball. 5
Michael Ballack A mature performance, eclipsing his midfield team-mates. Shouldn’t have been taken off. 6
Joe Cole Missing in action for most of the evening. 5
Florent Malouda Yet to find his feet, although at least he worked hard on the night. 5
Didier Drogba Drogba was by far Chelsea’s biggest offensive threat, although we did see the worst of him on a couple of occasions, when he went to ground far too easily. 6
Subs:
Salomon Kalou Thrown on instead of Nicolas Anelka, and it was his low ball that Riise headed past Reina. 6
Nicolas Anelka No time to make any substantial impact. 5
Agree with our ratings? Let us know by leaving a comment…