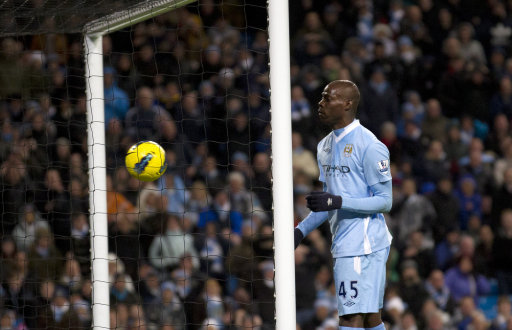 The league-leaders kept their 100% home record this season with a goalfest at the Etihad Stadium against Norwich. However, it took City over half-an-hour to break the deadlock, courtesy of a superb piece of skill by Sergio Aguero. Surrounded by Norwich bodies in a crowded penalty area, he still managed to twist and turn before prodding the ball past ‘keeper John Ruddy with ease.

After the break, Samir Nasri, Yaya Touré, Mad Mario and Adam Johnson all scored, with Balotelli nonchalantly nudging the ball over the line with his shoulder after his initial effort was blocked by Ruddy.

Norwich did get on the scoresheet however, with striker Steve Morison deservedly finding the back of the net late on after another impressive performance.

Roberto Mancini’s footballing Harlem Globetrotters stay comfortably on top of the table, while Paul Lambert Canaries won’t have a tougher fixture this season.