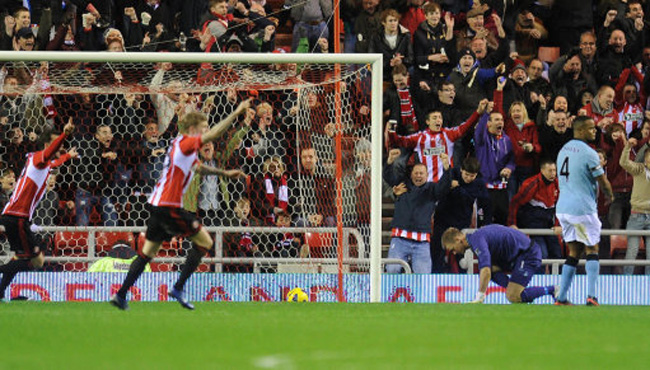 While United were securing a dramatic victory at Old Trafford, their nearest rivals in all senses of the word were struggling at the Stadium of Light.

Despite staying close to the top of the table throughout the season so far, the Citizens haven’t looked nearly as good as they did for large parts of their victorious 2011/12 campaign and once again, they failed to click against Sunderland.

City did create some good chances, with Vincent Kompany hitting the bar and Yaya Touré getting forward whenever possible, but it was ex-Citizen Adam Johnson who eventually bagged the only goal of the game on 53 minutes. Cutting in off the flanks, Johnson fired home a left-footed effort which beat Joe Hart at his near post.

Roberto Mancini’s men pushed for an equaliser but the Black Cats stood up well to the champions, although both Sergio Aguero and Edin Dzeko did go close late on.

The defeat sees City go seven points behind United at the top of the table while Martin O’Neill’s charges move seven points clear of the drop-zone.