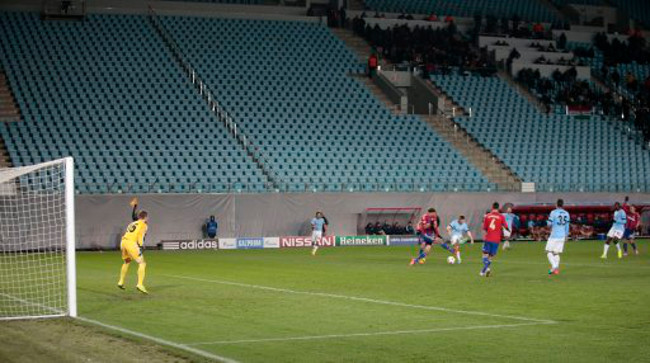 Played behind closed doors due to previous crowd disturbances by the CSKA fans, this was very much a game of two halves.

City bossed the first 45, slicing through the Moscow backline time and time again with Sergio Aguero and then James Milner bagging a goal each before the break. Milner also hit the woodwork and that miss would come back to haunt the Citizens in the second period.

The superbly-monikered CSKA boss Leonid Slutsky sent on Seydou Doumbia at half-time and the Ivory Coast hitman had a huge impact on proceedings. With the visitors taking their foot off the gas, CSKA pushed for a goal and it eventually came when Musa’s centre was fired home by Doumbia from close-range. And then, with less than five minutes remaining, the African forward produced the most theatrical of dives in the box. Bedras Natcho converted the resulting spot-kick which ultimately gave both sides a share of the spoils.

The draw sees City third in Group E after three games, seven points behind leaders Bayern Munich and two behind Roma. Manuel Pellegrini’s hopes of steering his side out of this group of death are now hanging by a thread.