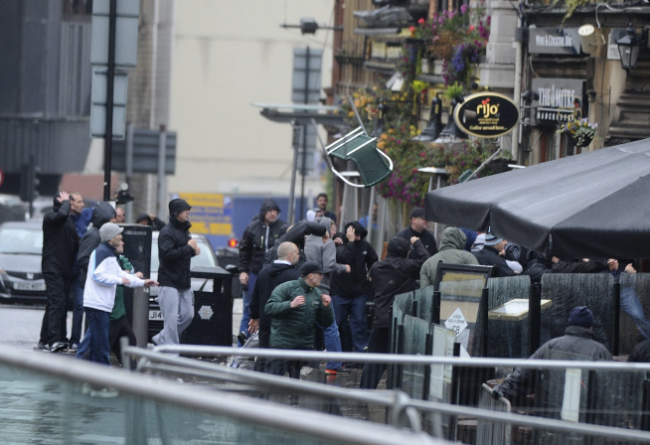 It’s with our heads hung that we’re reporting that violence has broken out in Manchester this evening mere hours before the Champions League game between Man City and Sevilla.

Twitter is currently awash with photos and footage of people scuffling in the streets, hurling chairs at one another and generally behaving like utter louts…

This is what happened when Sevilla met Man City’s Blazin Squad today in Manchester.. pic.twitter.com/WdrydhztdB

According to the Daily Mail, five fans have been arrested on suspicion of violent disorder and at least one man is thought to have suffered a head injury amid the fray.

Greater Manchester Police confirmed that at least three of them were Polish football fans, rather than supporters of either Manchester City or Sevilla, while the man treated for a head injury was Spanish.

Truly pathetic. There’s nothing like a football match to coax the moron fringe out of the woodwork.

In a case of spectacularly poor timing, Sevilla’s official Twitter account went and praised the “good atmosphere” in Manchester roughly five minutes after reports of disturbances began filtering through…