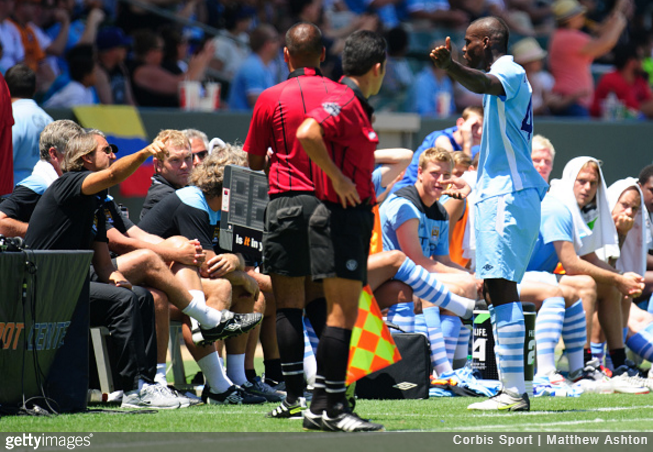 Pre-season is a time for experimentation, a time for frivolity, and yet Mario Balotelli famously found himself chastised for both during Man City’s Herbalife World Football Challenge match against LA Galaxy in July of 2011.

Balotelli opened the scoring with an early penalty at the Home Depot Center, then shortly thereafter found himself presented with a routine chance to double both his and City’s tally.

However, instead of simply wrapping up the one-on-one, the erratic 20-year-old Italian striker attempted to score with an impudent backheel trick shot.

He failed to connect properly, sending a limp shot dribbling wide only to turn around and see his number come up on the sub board.

Singularly unimpressed with Balotelli’s lack of application, a visibly irate Roberto Mancini immediately replaced him with James Milner before scolding his young protege in front of everybody on the touchline…

Balotelli later claimed he had tossed the shot off on purpose because he thought he was offside, though Mancini remained unswayed by the excuse on offer.

I hope this is a lesson for him. In football you always need to be professional, always serious and in this moment he wasn’t professional.

He needs to understand his behaviour has to be good in every game – not just in a final or a semi-final but every game.

If you are serious, you can play 90 minutes. If not, you can come and sit by me on the bench.

Mario is young, I want to help him and that is the end of it. To take him off after 30 minutes is enough punishment. It won’t have been easy for him but it has to be a lesson.

Asked as to the precise nature of the verbal dressing-down he gave Balotelli from the dugout, Mancini opted for the diplomatic answer:

It was all in Italian. In English I would find it difficult to give you the translation.

But Mario is streetwise, he knows he was not offside.