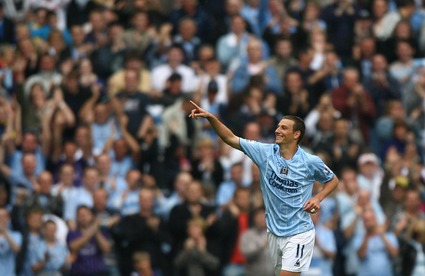 Who predicted that the most successful transfer of the summer would involve Shakhtar Donetsk and Man City? Not me, for one. But this Sven chap clearly knows his stuff â€“ signing playmaker Elano Blumer has been a masterstroke. The Brazilian put in yet another man-of-the-match performance, in City’s 3-1 stroll against Middlesbrough yesterday.
Elano is the heartbeat of Sven’s brave new City. He makes the game look so easy, and appears to have more time on the ball than everyone else on the pitch â€“ always the sign of a class player; Paul Scholes and Juan Roman Riquelme, both of whom perform similar roles to that filled by Elano, share this trait.
Spurs could reportedly have signed both Elano and City team-mate Martin Petrov â€“ another Sven success story â€“ for less than the cost of Darren Bent. Now who’s laughing at the Swede?
Photo Getty Images