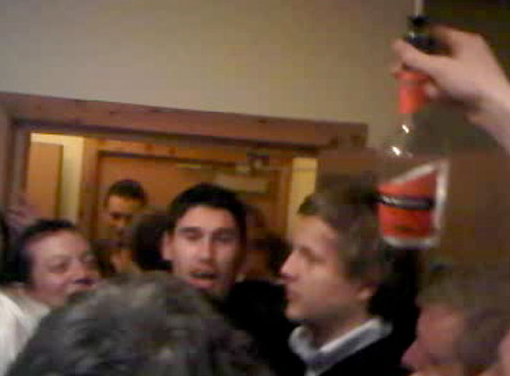 Gareth Barry, photographed near some booze. The horror!

Manchester City players Joe Hart, Gareth Barry, Adam Johnson and Shay Given were rumbled enjoying themselves a bit too much at a university party in St Andrews, Scotland, on Monday – just one day after their team lost 3-0 at home to Arsenal. This will not stand, man.

Seriously though, who said footballers weren’t allowed to have fun too. It’s just a bit weird that their idea of fun is dancing to ‘Jump Around’ by House of Pain in a tiny living room, whilst swigging from a bottle of blue Thunderbird. Or somesuch.

Shame they don’t play for Man Utd, otherwise the starstruck students at the party would have been treated to the sight of a red-faced pensioner storming in and dragging the quartet out of the house by their collars. Bob Mancini probably just shrugged and poured himself another shot of grappa.

The Sun has the requisite grainy video of the City players at the party. We have much better footage than that…