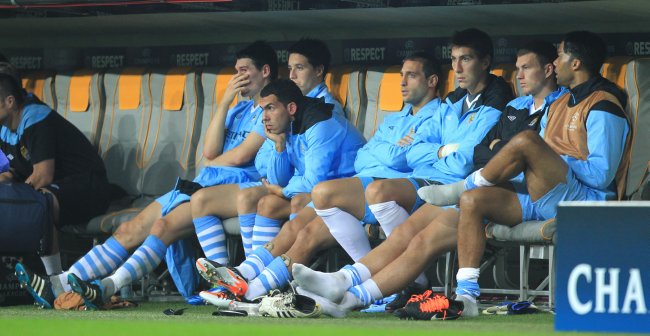 Man City were given a bit of a humbling by Bayern Munich in the Champions League last night, eventually going down 2-0 in the Allianz Arena courtesy of a brace from Mario Gomez.

However, the major talking point emanated from the City bench where, according to a pretty peeved Roberto Mancini, Carlos Tevez flatly refused to enter the fray as a second-half substitute – a claim that Tevez himself has denied this morning, citing that he was ‘ready to play’ and that it was all just a big ‘misunderstanding’.

Mancini went on to state that he is now ‘through with Tevez’ and that he ‘wants him out’ of the door as soon as possible, while also expressing his disappointment at Edin Dzeko’s conduct, with the Bosnian shaking his head deliberately after being substituted for Nigel de Jong ten minutes after the interval.

In addendum: I’ve heard premonitions this morning that Tevez is now ‘finished at the highest level of the game’ after his latest little escapade, which is, of course, nonsense.

At the very worst, Tevez could afford to have a ‘season out’, burying his head in the sand at Anzhi (or some other club of their ilk), raking in £300k-a-week to sate his stable of creaming puppet-masters and agents while scoring goals for fun – right up until the point when an Inter/AC/Real/Barca are convinced that the heat’s died down and he’s worth another punt six/twelve months later.

Unfortunately for the assorted Gods of decorum and decency, he’s far, far too good-a-player to simply write off.