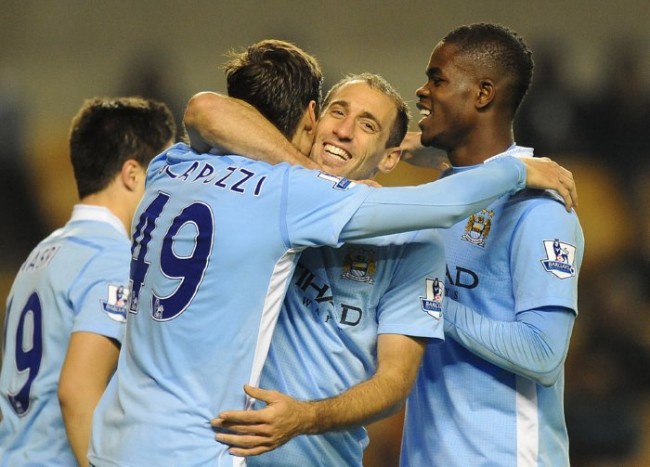 Just the five? How disappointing.

Manchester City (or more accurately, their second string) made it 21 goals scored in their last five matches with a 5-2 rollocking of Wolves at Molineux last night – easing into the Carling Cup quarters alongside Man Utd, Chelsea, Arsenal, Liverpool, Blackburn, Cardiff and Crystal Palace.

A goal apiece from Wolves midfield pair Nenad Milijas (his third in three games against City) and Jamie O’Hara sandwiched the deluge, with Adam Johnson, Samir Nasri notching for City before Edin Dzeko took his impressive personal goal tally for the season to eleven with yet another predatory brace.

In between Dzeko’s double, 20-year old City whippersnapper Luca Scapuzzi looked to have forced home his first goal for the seniors, though the powers that be chalked it off as an own-goal due to the ball richocheting back off the post and in off Wolves ‘keeper Dorus De Vries.

The next poor lambs to be bought before the City firing squad? Why, it’s Wolves again…at the Etihad…on Saturday.