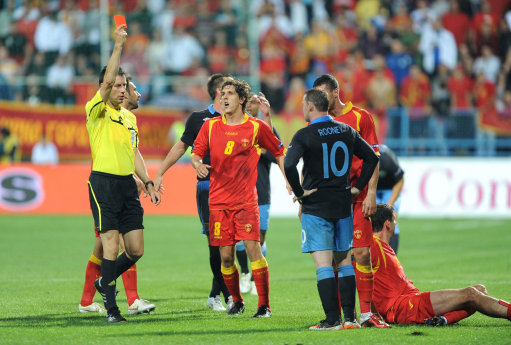 While he will no doubt now be steeling himself for the indignity of Thursday night European football, Wayne Rooney at least received some good news on the morning after United’s shock exit from the Champions League.

The re-haired striker rocked up to UEFA HQ this morning, along with Fabio Capello and host of FA bigwigs, in attempt to get his three-game EURO 2012 ban (for kicking out at Montenegro’s Miodrag Dzudovic) decreased – and what do you know, the appeal worked, with the European football authorities deciding to knock one game off the ban.

However, if he is sent off again, the ban for the extra match will kick in, while Rooney has apparently also agreed to do some kind of coaching in the community malarakey.

Rooney will still miss the opening two games of the tournament, against France and Sweden, but will be available to face Ukraine in what could be a vital game for the Three Lions.

It may not make up for his side’s embarrassing Champions League exit, but it’s better than nowt.

Interestingly, will this outcome now encourage clubs in England to challenge FA decisions more often? I suspect so.