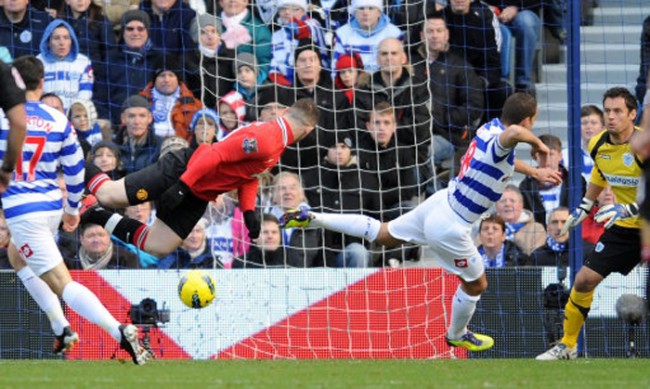 Manchester United returned to the summit of the Premier League (if only temporarily) after a stroll in the park against QPR in London.

Wayne Rooney got the ball rolling after just 52 seconds, heading home Antonio Valencia’s cross and this early breakthrough would set the tone for the following 89 minutes. The visitors totally dominated and only for some impressive netminding from Radek Cerny, would have been further ahead by half-time.

The second goal did come for United just before the hour mark, however, after Michael Carrick dispossessed Joey Barton and raced towards the Rangers’ box before firing home. Cerny should have done better to stop the shot, but considering the ‘keeper’s heroics all afternoon, his error should be forgiven.

Neil Warnock’s men did battle hard to get back into the game, with Heidar Helguson threatening David De Gea’s goal on a number of occasions. But ultimately, it was a well-deserved win for a United side who look to be bouncing back from their shock Champions League exit.

With Javier Hernandez also back fit, the future looks rosy for the Red Devils. However, Rangers now find themselves just three points clear of the relegation zone, which must be a source of concern for Warnock.