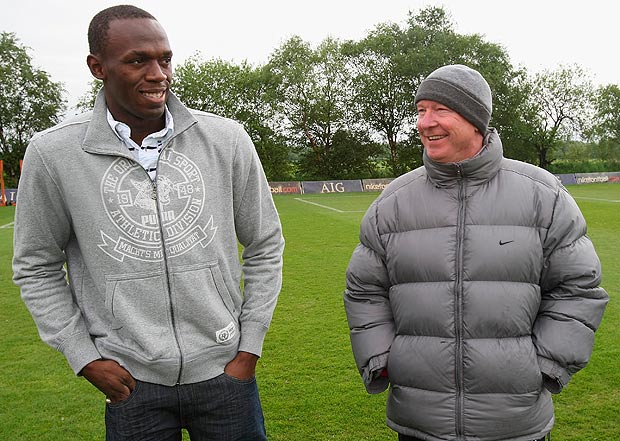 Hot on the heels of his explosive 100m victory at London 2012, Jamaican megastar Usain Bolt has reiterated his desire to play for his beloved Man Utd.

The sprinter visited Sir Alex and co back in 2009, when he floated the idea of having a trial with the club. And now, three years later, the 6’5″ sporting icon is once again on the lookout for a shot at footballing glory. He said:

“People think I am joking. But if Alex Ferguson called me up and said, ‘OK let’s do this, come and have a trial’, it would be impossible for me to say No.”

“I would not take up the challenge if I didn’t think I was good enough. I am a very accomplished player and know I could make a difference. I  would be the fastest player in the team — but I can play as well.”

“I am in Britain for a few more days. If Alex Ferguson wants to give me a call he knows where I am. I definitely want to see what I could do. I think I could step up to the Rooneys.”

This ain’t the first time Usain’s angled for a United run-out: See here and here for details. He’d certainly add a bit of pace (and height – just ask Colin Jackson!) to the United attack and some would argue that Theo Walcott has already made a successful footballing career out of having pace but little else (sorry Arsenal fans).

American footballers often straddle both track and field and the gridiron, but could a top sprinter really ever make it at a professional level in association football? I think not. Although quite a few good cricketers have made the grade at good old footie, from the Compton brothers, Denis and Leslie, to the likes of Andy Goram (played cricket for Scotland) and Joe Hart (Shrewsbury Cricket Club), so you never know!

Post Script – Thanks to Francis for flagging up the glaring omission of one Adam Gemili – Junior sprint champion and former Dagenham & Redbridge defender!