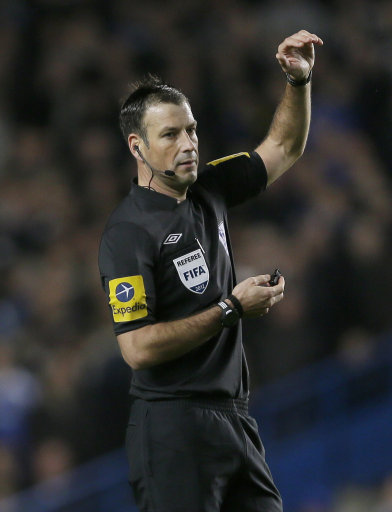 Chelsea have lodged a formal complaint with the FA over what they call ‘inappropriate language’ directed at their players by referee Mark Clattenburg during yesterday evening’s incident-packed ripsnorter against Manchester United at Stamford Bridge.

“We have lodged a complaint to the Premier League match delegate with regards to inappropriate language used by the referee and directed at two of our players in two separate incidents in today’s match.”

“The match delegate will pass the complaint to the Football Association. We will make no further comment at this time.”

A spokesman for the Professional Game Match Officials board (referees’ union) said:

“PGMO is aware of the allegations and they are being treated with the utmost seriousness. Mark will co-operate fully and welcomes the opportunity for the facts to be established.

“No further comment will be made until this matter has been properly investigated.”

The ‘inappropriate language’ is, almost inevitably, believed to be of a racial nature (’tis the season to be racist after all), with reports that one of the slurs was directed at John Obi Mikel when he confronted Clattenburg after United’s iffy third goal and that the other instance centres around the referee calling one of the Chelsea players – thought to be Juan Mata – a ‘Spanish twat.’

Again, we must stress that these are nothing but rumours as things stand.

It’s incredibly hard to believe that a Premier League referee (who was, lest we forget, ‘miked up’ and whose every word could be heard by at least three or four other members of the officiating team) could be so callous, but we’ll have to reserve full judgement until the truth comes to light.