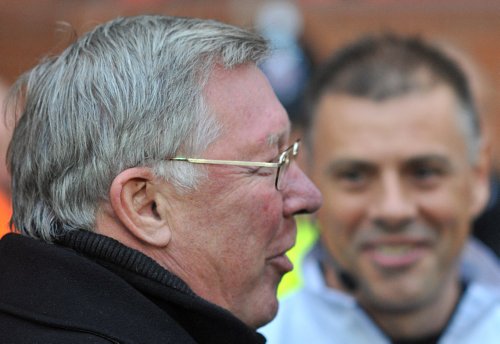 Having retired at the end of last season, former Premier League referee Mark Halsey has deemed to time to be right to go public and reveal that he was on texting terms with former Manchester United manager Sir Alex Ferguson.

The revelations come in Halsey’s new book, “Added Time” (word cannot express how little we want to read that!), which is currently being serialised in The Sun, with the ex-official claiming that he contacted Ferguson directly to ask him to “speak out” amid the race furore that whipped up between referee Mark Clattenburg and Chelsea midfielder John Obi Mikel during a game against United at Stamford Bridge last season.

“I took matters in my own hands and rang Sir Alex asking him to speak out. He agreed and used his Friday press conference to say he could not conceive of Mark saying such things. It helped the situation a great deal.

“It took time to gain Sir Alex Ferguson’s respect but in the end we had a very good relationship. One thing should be made clear about my relationship with Sir Alex.

“I may have spoken to him a lot and shared texts but he knew when I crossed that white line there were no favours.

“Players and managers would not respect you if you gave decisions based on friendship.”

Indeed, is it not a little self-contradictory to claim to have never crossed the line in terms of favours while gleefully reciting an anecdote about asking Fergie for a favour? Playing straight into the conspiracy theorists’ hands with that one, Mark.

Of course, the worst part of this is that Ian Holloway’s paranoid persecution-complex wibblings might be proved right after all.

Ask yourself, is that really a world you want to live in?