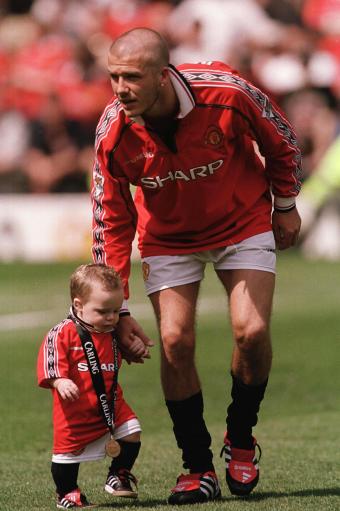 You may have caught wind of the news yesterday that David Beckham’s eldest son, Brooklyn, 14, had a trial with Manchester United’s kiddiwinks side with the logical explanation being that United were eyeing him up for a spot in their academy, thus following in his old man’s Predator-clad footprints.

Indeed, yesterday’s Old Trafford source told the Manchester Evening News: “[Brooklyn] was there with his dad and took part in a practice session with one of the academy sides. It was a chance for him to impress and if he’s done well then no doubt the club will look at taking him on.”

But, my my, what a difference a day makes. Just 24 little hours…because today’s Old Trafford source has supposedly leaked word that, although Beckham’s first-born sprog did train with the United youth side at Carrington yesterday as reported, it was just a practice match not – repeat NOT – a formal trial and that the club have “no intention” of signing him.

Oh. Okay. Gentle people of Pies, choose your favourite source and maketh up thine own minds.

Anyway, as we’re legally obliged to do so, here’s that clip of the Beckham boys mucking around with Zlatan and Thiago Silva during a PSG training session last season…