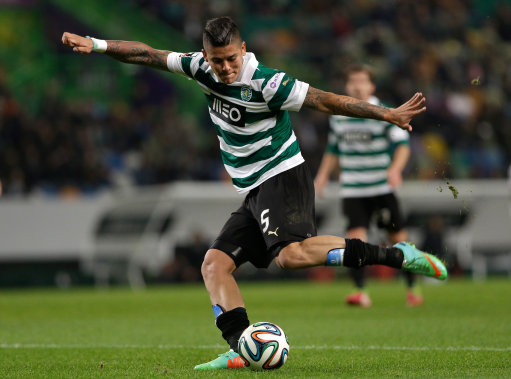 The ongoing row over Marcos Rojos seems to have reached tipping point after the Argentinian defender’s club, Sporting Lisbon, appeared to accuse one of the 24-year-old’s potential suitors of footballing espionage!

Manchester United are known to be eager to sign Rojo and have previously seen a £15-odd million bid rejected as reports about problems with the player’s third-party ownership by the Doyen Sports group continue to rumble on.

However, yesterday Sporting released a serious, itemised club statement in which they accuse an unnamed club (no prizes for guessing whom!) of using an impromptu visit to the Jose Alvalade stadium to sneak the CEO of Doyen Sports (a monstrously powerful group of super-agents) in for a hush-hush meeting with Rojo by disguising him as an employee of the visiting club.

On 02/08/2014, Sporting received a written proposal for the acquisition of the player, which was flatly rejected in conformity with that which had been agreed with the [Rojo’s] agent;

Following the rejection of the proposal and a request for a meeting, that same club made a surprise visit to Estádio José Alvalade, with that club thereby being received out of courtesy by an member Sporting’s Board of Directors;

Subsequently, Sporting became aware that Doyen took part in the resulting meeting, namely by convincing the member of Sporting’s board of Directors that the person in question was as member of the visiting club and not in fact the CEO of Doyen.

The situation was masked to such a degree that the person in question did not at any time speak in Portuguese, communicating at all times in the language used by the visiting club;

On 07/08/2014, Sporting informed Doyen via email that the club had sent the contracts involving the economic rights of the players agreed with that company to its legal department and noted that the club considered the interference and illegitimate pressure being applied by the CEO of Doyen, Mr. Nélio Lucas, as totally unacceptable.

As a result, Sporting have now said that they are proceeding to terminate “by just cause” all of the respective contracts their players have with Doyen.

We have the sneaking suspicion that this is going to get messy…SUPER messy.