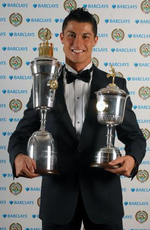 As expected, Cristiano Ronaldo has won both the PFA Young Player of the Year and the Player of the Year awards. Ronaldo said: ‘It is a special night. It is amazing and a big honour for me to win trophies like this in the English Premier League. I am very proud.
‘My colleagues have voted for me and that is fantastic because the players know the qualities of playersâ€¦ I want to keep working hard and getting better because these trophies have now given me more motivation.’
For the main Player of the Year award, Didier Drogba was voted in second place, with Paul Scholes in third. For the youngsters, Cesc Fabregas came second, followed by Aaron Lennon. I think the players got the awards spot-on (and you agreed with them), although I still think Michael Essien was incredibly unlucky not to have been shortlisted.