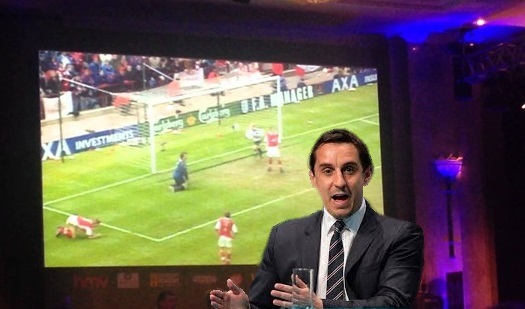 Having faced almost zero resistance in his rise to the top of the punditry tree (the punditree?), it seems like Sky Sports’ chief wibbler, Gary Neville, has now set his sights on a sideline in analytical comedy.

Appearing on the big screen at a “HMV Football Extravaganza” evening thrown in London on Tuesday evening in honour of Ryan Giggs, Neville used his giant touchscreen tablet to critique his former Manchester United colleague’s famous goal against Arsenal in the FA Cup back in 1999.

Laying the critique on thick, Neville picked apart Giggs’ slalom goal touch by touch – pointing out all the obvious chances the United winger had to lay the ball off to his teammates as he made his way toward David Seaman’s goal – with Giggs himself laughing along in the audience…

With most football punditry being laughable as it is already, we can honestly see this kind of thing being the natural progression.

Gary Neville, eh? Ever the innovator.