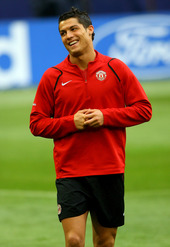 MILAN TEAM NEWS No Paolo Maldini for Milan tonight (not such a big loss), but Gennaro Gattuso has recovered from his foot injury and will start. Gattuso’s destructive qualities in midfield are key to Milan’s chances – they struggled without him in the second half at Old Trafford.
MAN U TEAM NEWS Both Nemanja Vidic and Rio Ferdinand could start, with the defensive pair having recovered well from collarbone and groin injuries. Louis Saha may be on the bench, despite his recent hamstring tweak. Gabriel Heinze, Cristiano Ronaldo and Paul Scholes are all one booking away from a ban that would rule them out of the final – that would be heartbreak for Scholes in particular, who missed out on the 1999 Champions League final for the same reason.
[Photo: Getty Images]

ODDS (Via Paddy Power): 90mins: Milan 5-4, Man Utd 5-2, Draw 21-10
To qualify for next round: Milan 5-4, Man Utd 4-7
THE VERDICT Although Man U take a lead to the San Siro, I’d say the tie is perfectly balanced, with no clear advantage to either team. A 1-0 win does the job for Milan, but the sheer speed of Man U’s attack (and age of Milan’s defence) means that the Premiership side will naturally create chances on the counter-attack.
I expect Milan to play it very tight in the first half. They’ll be happy with 0-0 at the break. I also expect Gattuso to wind up Scholes and Ronaldo – how will the Man U pair react if booked early on, having to play the rest of the match knowing that they won’t be able to play in Athens if they go through? Scholes is level-headed and pragmatic but he’s missed out before; Ronaldo would be gutted and I wouldn’t be surprised to see a few tears if he was to be shown a yellow card.
If United want to go through they need to do two things: neutralise Kaka and dictate the pace. Milan may aim to slow the game down with square passes and time-wasting tactics. As long as United don’t forget to play at the scintillating pace that sees them carve up Premiership opposition, they should get through. It will be devilishly close thoughâ€¦
PREDICTION Milan 2-2 Man Utd (United go through)
For more analysis, check out Caught Offside’s excellent preview.