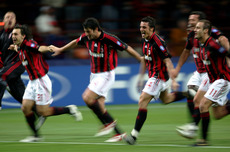 Well that was a let-down for all Man U fans and fans of English football in general. Milan stormed out of the blocks and never let the visitors settle – fair play to them, they played the perfect match. Edwin van der Sar made a couple of great saves, but I can’t think of one United outfield player who did himself justice. Rooney and Ronaldo failed to dazzle in attack, whilst United’s midfield was made to look horribly lightweight by Pirlo, Seedorf and man-of-the-match Gattuso (he could have been MotM five times over). Nemanja Vidic was a long way short of match fitness and Rio Ferdinand’s composure was sorely missed, as was the energy and drive of Gary Neville; Wes Brown and John O’Shea are unconvincing deputies.
United’s 4-5-1 formation never seems to work and it certainly didn’t last night. I’ve rarely seen a United team create so few decent chances. Click below to watch the key action from the matchâ€¦