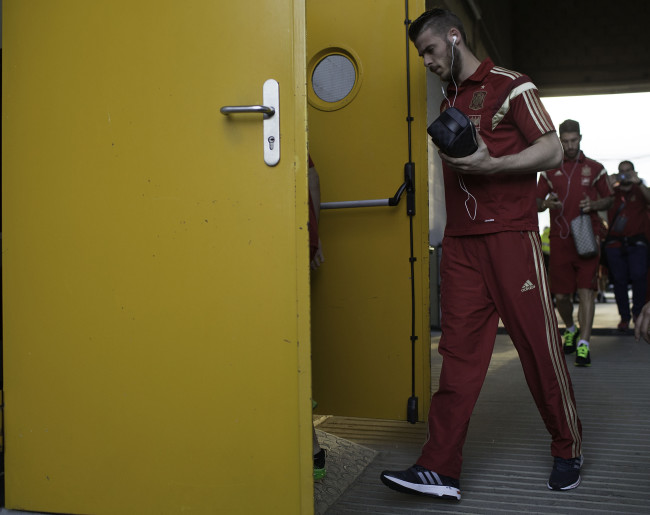 Spanish goalkeeper David Ge Dea has, claim The Sun, told Louis van Gaal he does not want to play for Manchester United.

We’ve talked with him, he was fully agreed with our decision. We have a goalkeeping coach, Frans Hoek. He had a meeting with David De Gea and he asks him ‘Do you want to play?’.

No. So then I have to take the decision. It is a process.

We had been observing him in preparation, he was not so good, he was not the same David De Gea as before. He was my best player last season. According to the fans, he was the best of the last two years.

De Gea wants to plays for Real Madrid. But the Mail says Van Gaal is wrong – he does want to play for United:

Sources close to De Gea have confirmed that the meeting with Hoek took place, but refuted any suggestion that he asked to be left out… Indeed, they say that he made it clear to Hoek that he wanted to play if selected…

De Gea is said to be ‘baffled’ by Van Gaal’s comments and concerned that his professionalism and commitment to training appear to be in question.

Is Van Gaal being economical with the truth?

Daniel Taylor explains how the revelation was aired:

Van Gaal’s revelations came after a press conference when he had been asked about De Gea’s position and made it clear there was no change – “he remains out of the squad” – before saying it would be better to discuss it in a “more intimate setting later”.

At the end of his conference, he took a seat beside the journalist who had asked him whether De Gea actually wanted to play and, clarifying that he was still talking on-the-record, proceeded to say it was the goalkeeper’s wish to be left out of the squad.

His comments were unusual, not just in the way they were delivered but because they also go against the club’s usual policy of trying to keep private conversations in-house…

Van Gaal was asked whether De Gea could win his place back if he was still in Manchester after the transfer window closes. “That depends on Romero and his form,” he said. United did, however, later stipulate they had no issues with De Gea’s professionalism.

The Times adds to the confusion by saying that Dea Gea never did say ‘No’:

Although United later attempted to clarify Van Gaal’s comments by claiming that De Gea’s answer had not been “No”, they did confirm that the goalkeeper was not eager to play because of the uncertainty over his future, meaning that he was not 100 per cent focused.

Whatever the politicking, the BBC says Van Gaal will not pick the Spain international, 24, until the transfer window closes.

Of course, to get what he wanted De Gea should have gone on the BBC TV to talk himself up and is club down, called in sick and then hired Raheem Sterling’s agent.