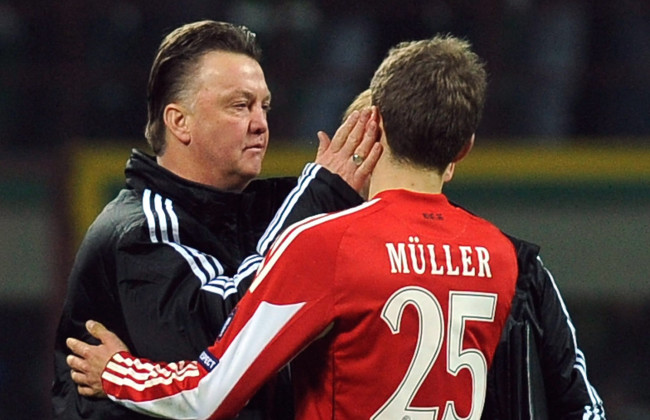 The Sunday Express leads with news that Bayern Munich’s Thomas Muller, 25, wants to join Manchester United. Readers learn that United have had a £60 million bid rejected this summer but Bayern manager manager Pep Guardiola is “prepared to cash in”.

The Bundesliga has to be careful not to fall further behind. We would be out of our minds to sell Muller… It’s difficult. Everyone knows our old friend Louis van Gaal. He is very stubborn in those things. Maybe he thinks that there is a price where Bayern will start to ruminate but there is no price at all. As I said because of our partners and our really good financial situation we are completely resistant. There is no price, Thomas Muller has four years more on his contract. There is no one, not here or anywhere, who can explain to me why we should sell Thomas Muller.

But he wants to join, right? The Express reports: “Muller has confided in friends that he is interested in a move to United alongside Schweinsteiger who has been delighted with his Old Trafford welcome. Muller knows that his wages would enjoy a hefty rise.”

Is that the ploy: confide in’ friends’ who betray their pal’s trust by telling media that the star could earn a lot more at another club thus triggereing a pay rise? Are those nameless friends also employees of Muller’s agent?

Helpfully, Thomas Muller was happy to talk about the rumours after scoring twice in Bayern’s 5-0 tonking of Hamburg. Asked if Van Gaal was after signing him, Muller replied: “I don’t know, you have to ask him. I am the wrong man for this question.”

The Mail on Sunday says Stones is in high demand. The paper’s headline runs: “Chelsea worried that Manchester United and City secretly want to sign John Stones.” So far this summer, Chelsea have made two bids for the Everton defender. They are  set to return with a third offer in the region of £30million before the transfer deadline. But will it be enough? Roberto Martinez says Stones is not available at any price.

I have said before the player is not for sale and that is the end of it. Our situation has been very clear from the beginning. We are not a selling club who will lose our best performers. He is very important player for us and we are looking forward to seeing the best of John over the next few seasons, not just the next few weeks.

The story goos that any change of heart at Everton will alert Manchester City and Manchester United to Stones’ availability, triggering a bidding war for the former Barnsley player.

The Liverpool Echo says Everton are alrady in talks with River Plate defender Ramiro Funes Mori. Martinez wants the 24-year-old Argentina international not as a Stones replacement, rather to challenge Phil Jagielka and John Stones at the heart of the Everton defence, says the local Everton paper.

The best / worst of the rest

Newcastle will invest £12m in Florian Thauvin, 22, from Marseille, reports the Sunday Mirror.

Former Arsenal and Chelsea defender Ashley Cole has had the last year of his contract with Roma ripped up, says the Guardian.