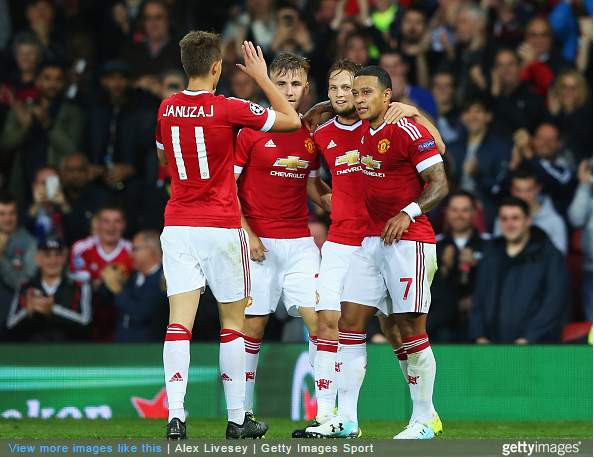 The Red Devils were expected to cruise through to the Goup Stages of the competition after drawing Brugge in the qualifiers. However after just eight minutes, the Red Devils were behind courtesy of a Michael Carrick own-goal after a free-kick into the United box.

The visitors could only hold to their shock lead for five minutes before summer-signing Depay fired home with a fine strike after a fantastic ball-juggling dribble.

Some goal that from Memphis Depay. 1-1 pic.twitter.com/W0ahawFRWq

The visitors still look threatening on the counter-attack, although both Wayne Rooney and Adnan Januzaj went close to putting United in front.

The second goal for Louis van Gaal’s charges came just before the break, with Depay bending a superb effort into the top corner.

Carrick made way for Bastian Schweinsteiger at half-time, with the German adding presence to the United midfield.

Sergio Romero almost gifted Brugge an equaliser, with the ‘keeper lucky not see Obbi Oulare score after dallying on the ball.

Depay then had a great chance to complete his hat-trick, but this time the Dutchman fluffed his lines and fired over from close-range.

On 80 minutes, Brandon Mechele picked up a second yellow for a foul on Javier Hernandez as Brugge battled to hold onto a reasonable score to take back to Belgium.

However, a third goal did eventually come for United at the death, with Marouane Fellaini nodding home a Depay centre.

Not a completely convincing performance from the Premier League giants, but a 3-1 first-leg win should suffice ahead of the return fixture. While the Old Trafford faithful have found themselves a new idol in the fleet-footed form of Depay.