Manchester United suffered their first defeat of the season at the Liberty Stadium on Sunday, courtesy of a superb comeback win from Swansea. 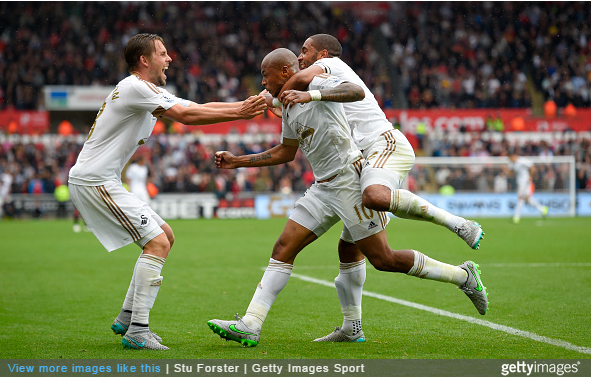 The visitors started well, with Wayne Rooney robbed by Ashley Williams when through on goal.

However, Swansea also created chances in the first period, with midfielder Gylfi Sigurdsson firing wide when he only had ‘keeper Sergio Romero to beat.

French hitman Bafetimbi Gomis then hit the frame of the goal with a deft outside-of-the-boot effort after bamboozling Daley Blind.

Soon after the restart, the Red Devils finally made the breakthrough when Juan Mata fired home from a Luke Shaw centre.

Soon after that change, the hosts were level, with Andre Ayew nodding home a Sigurdsson centre.

Then, just four minutes later, Swansea took the lead, with Gomis latching on to a superb Ayew through-ball before slotting pass Romero.

The visitors tried to get back into the game but they couldn’t step yet another 2-1 defeat at the hands of Monk’s super Swans.

The win sees Swansea leapfrog United into fourth place while Louis van Gaal surely needs to bring in another centre-forward before the transfer window shuts.