UPDATE: Manchester United had all summer to work on their project but David De Gea’s transfer to Real Madrid is off because the United board didn’t hand in their work on time.

The BBC says United are responsible for the deal collapsing.

The line is that they did not get their paperwork to Spanish Football Federation headquarters until a minute after the 23:00 BST deadline. In their defence, United say they have a receipt that proves they submitted the relevant documents in time.

United had stood to receive £18.3million in cash for De Gea, plus Keylor Navas, the Costa Rica No.1, valued at £10.9million.

Real Madrid are likely to appeal to push the transfer through. The Times says FIFA will look at the deal today: 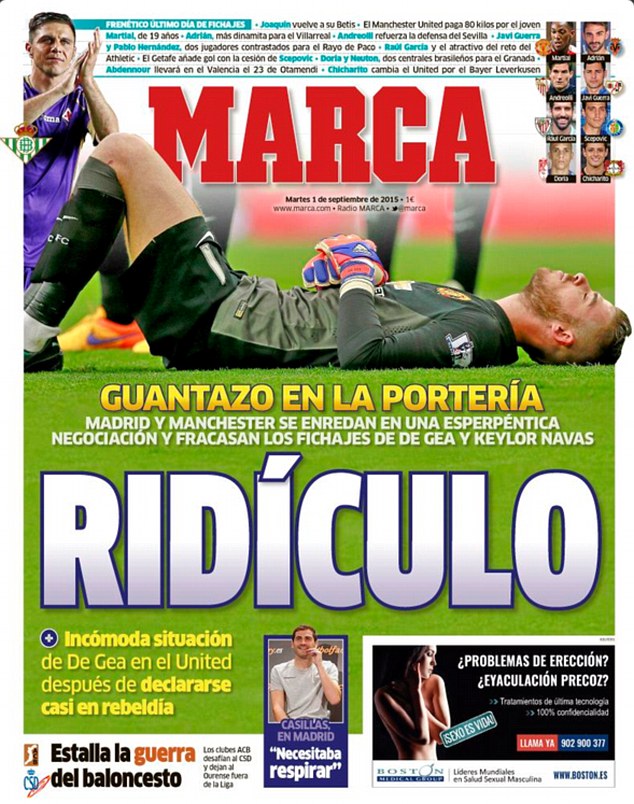 “Ridiculous”, in case you were struggling with the translation there!

What we wrote last night:

All those vows that David Dea Gea would be made to honour the final year of his Manchester United contract unless Real Madrid made a world-record offer have been proven wrong. The Spanish goalkeeper has left Old Trafford for Real Madrid.

Real have agreed to pay €25million (just over £18million) for De Gea – and they’ve thrown in Keylor Navas, the Costa Rica goalkeeper, who is valued at €15million (about £11.million).

Man United had wanted £35million in cash for their best player – the gangly youth who arrived at Old Trafford from Atletico Madrid for £18.3million and endured a fraught first season.

The Press waded in on De Gea. Sir Alex Ferguson called them “idiots” for doubting the young man’s talent.

I don’t think people appreciate just how hard it was for me coming to a new country at that age and a different type of football. I knew I had to become bigger physically. You can see now I look different to when I first came here. I have much more muscle. In training the players would deliberately hit high balls into me and barge into me so I would get used to that side of the English game. I actually enjoy the physical side of it all now.

De Gea blossomed at United. That he’s left so soon will surely hurt the club.