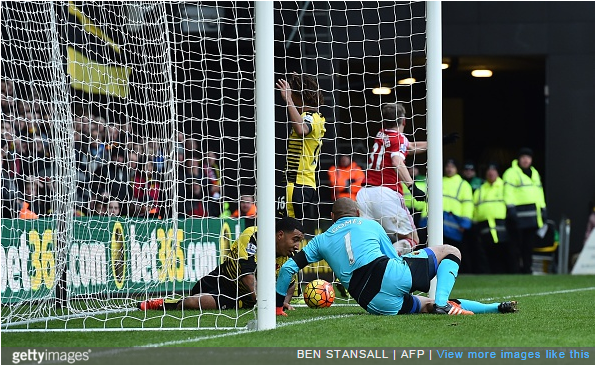 In the absence of Wayne Rooney and Anthony Martial, Dutchman Memphis Depay started in an attacking central berth, and it only took 11 minutes for the visitors to take the lead, with Depay deftly volleying home from close-range after an Ander Herrera cross. However, while the Red Devils dominated possession, the Hornets did have chances to get back on level terms, with Odion Ighalo failing to make the most of a swift counter-attack.

In the second-half, the game opened up, with David De Gea was forced into a superb stop from Almen Abdi. While at the other end, Jesse Lingard failed to capitalise on a fine United move, with his shot saved by Heurelho Gomes.

The game looked to be heading for a 1-0 win for Louis van Gaal’s men when Marcos Rojo felled Ighalo in the box. Deeney fired home the resulting spot-kick but just three minutes later (on 90 mins), the Watford striker would put through divert Bastian Schweinsteiger’s cut back into his own net.

The win saw the Red Devils go top of the table temporarily while Watford will rue that late, late own-goal.