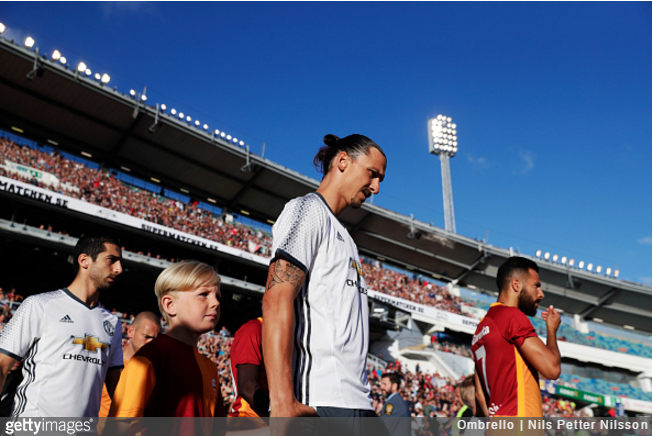 Zlatan Ibrahimovic got off to a roaring start in a Manchester United start on Saturday evening in Gothenburg, tucking away an (ever so slightly shanked) overhead kick in his new side’s 5-2 friendly win over Galatasaray.

The Swede took roughly four minutes to open the scoring on native soil, getting just enough of a connection on Antonio Valencia’s cross to send the ball bouncing past Fernando Muslera…

Despite Zlatan’s early opener, United still went in 2-1 down at the break before a raft of half-time changes gave them a fresh injection of organically-sourced, line-caught, free range impetus.

Wayne Rooney equalised 10 minutes after the restart before a swashbuckling run from Marcus Rashford ended in the youngster being legged up in the area – Rooney sticking away the penalty to put United 3-2 ahead on the hour mark.

The moment Zlatan realised Rashford is the Wythenshawe Eusebio pic.twitter.com/MWsgFmgjIm

The eyebrows have it.

A couple of goals from Marouane Fellani and Juan Mata respectively saw the scoring suitably fleshed out by the time the 75th minute had elapsed.

While we’re loathe to put too much stock in pre-season encounters, things are suddenly looking a damn sight more exciting at United than they have for the last few years – if only as a direct result of that incredible stable of dynamic attacking players Jose Mourinho has at his disposal.

Let’s see how it pans out, shall we?