Although what a cast of legends! 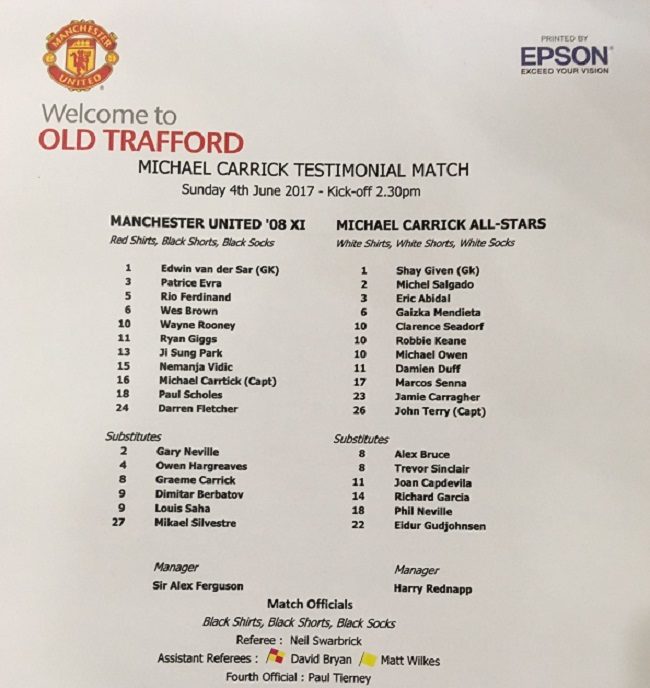 However, the game itself, played in front of 70,000 fans, was a top-class spectacle, with an opening goal from ex-Middlesbrough midfielder Gaizka Mendieta cancelled out by a Nemanja Vidic header.

Robbie Keane then put Harry Redknapp’s All Stars back in front, courtesy of a cheeky lob.

Then on 82 minutes, the man of the moment equalised, with the midfielder firing home a superb daisy-cutter which arrowed into the corner of the net.

The game also saw Sky pundits Gary Neville and Jamie Carragher go head-to-head, with the ex-Liverpool man making the most of an opportunity to take out his United counterpart.

Paul Scholes’ performance was another highlight of the game, with the 42-year-old looking as good as ever, pinging the ball around with ease…

Look at Paul Scholes’ pass during Michael Carrick’s testimonial match, wonderful!!!! But as usual, Rooney wasted it. Scholes is 🔥 🔥 🔥 pic.twitter.com/Iek7T0vpAZ

The game would end all square (yet another home draw for United!), with the star-studded event a fitting tribute to a player who won five Premier League titles with the Red Devils as well as lifting the Champions League in 2008.

We’ll excuse the ‘dab’ – it was for his son and it was his big day after all!

Quite a player and, after signing a one-year extension with Jose Mourinho’s United, one with a lot more to offer the club.